It is day 13 of January Rules and I am going strong. Interestingly, I have been presented with opportunities to eat processed flours- like croissant sandwiches, Mac n’ Cheese from Grub, and pizza from Tony’s Coal Fired Pizza. Constantly. I normally do follow the three rules of January Rules, or at least I thought I did. I have come to realize that my weakness for food made with refined flour is greater than I thought and I make a lot of exceptions. Pizza, croissants, desserts, breads, pasta- oh you name it and I love it. Unfortunately, all of these things are made with refined flours that have very little nutritional value and contribute to empty calories, fatigue, malnourishment, constipation, mood swings, and preventable chronic diseases.

What makes flour refined? Basically, the wheat kernel is processed in such a way that all of the nutrients from the original plant are removed. Flour comes from the wheat plant, which contains an endosperm, germ, bran and husk. The four parts are collectively known as the kernel or wheat berry. The endosperm is the bulk of the edible part of the grain. The germ contains most of the vital nutrients for the plant (which would be given to us if we ate it). The bran is the chief fiber donator of the grain. The husk is the outer, inedible part of the grain. However in the refining process, the germ, bran, and husk are removed, leaving only soft, smooth flour that is stripped of all of the nutrients. Through the Enrichment Act, the FDA requires manufacturers to enrich the processed flour by adding in iron, niacin, thiamin, folate and riboflavin. Though, if you look at the picture below, you will see that the intact kernel contains more nutrients than were added back in to the refined flour.  Also, our body does not recognize the enriched ingredients as well as nutrients from whole foods. Refined flour is a very simple carbohydrate that cause spikes in blood sugar, which spirals to a chain of undesirable reactions in your body. Refined flours are just empty calories that promote weight gain and bad health. Once refined flours enter your bloodstream, it acts like sugar. And we know that sugar is toxic and highly addictive.

What is whole grain flour? Whole grain flour is flour that milled in its entirety, with only the husk removed. Therefore most of the nutrients are still intact. The flour will have brown specks and will not be as smooth as refined flour. 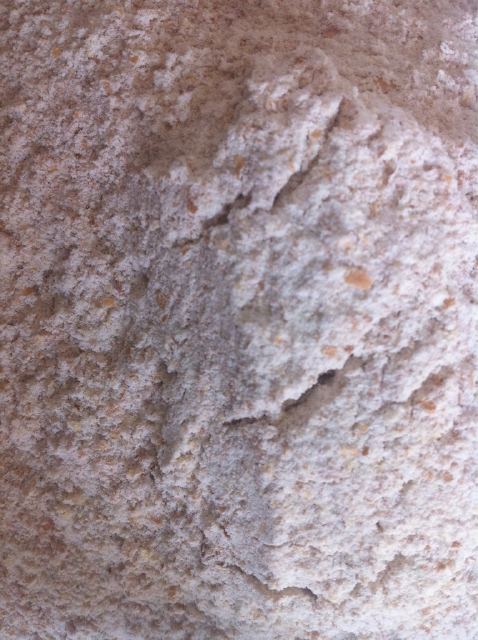 Whole grain, freshly milled wheat flour. Notice the specks and how it's not super processed? I bought it at Ferry Building Farmers' Market and it's rule #1 of the January Eating Rules challenge.

I used to reach for empty calorie carbs like breads to fill me up quickly. Or I used to add bread to my breakfast, lunch, and dinner to help me feel satiated. I thought I had overcome all of that, but January Rules has made me aware how mindlessly I eat these foods. I have tricked my body and mind into thinking that I need food made with flour to keep me full and complete my meal. Most of us have done that. Unfortunately, refined food makes up the bulk of most people’s meals. Refined food is food that has refined flour as an ingredient. Since there is a serious lack of nutrients in the refined food, people are left malnourished and unsatiated.

It is not easy going cold turkey on the food that makes up most of your diet, but by being aware of what you eat is the first step in eliminating the refined food. Part of January Rules, the challenge is getting used to not eating refined foods and finding wholesome replacements. It wouldn’t make sense to substitute crap for crap. It is a big misunderstanding into thinking all flours are crap, as whole grain or intact grain flours still contain most of the nutrients. I have replaced wheat flour for whole grain buckwheat, whole grain spelt, and whole grain wheat flour. In November, I discovered Eatwell Farm’s whole grain flour at the farmers market. I now use this flour to make roti, which complements my meals and makes for a quick snack. I have also used whole grain flour to make savory breakfast muffins and pumpkin pancakes, which have replaced cold cereals and store bought bread in my diet. I have also started to incorporate more lentils and beans into my diet.

This is not to say that I have completely given up refined flours, because that would mean depriving me of everything I love- cake, pizza, and fresh, sourdough bread. Though, as January Rules permits, I can have one cheat a week. The one cheat a week is very important, because it enforces me to make more conscientious food choices and make sure that that piece of bread/cake/pizza is totally worth it or otherwise forgetta bout it.

How do you fill the nutritional void in your diet?

Did you know that Club Dine In! is on Twitter and Facebook? Follow @clubdinein for daily health, fitness, and social news, recipes and delicious tips! Join the Club Dine In! community on Facebook to connect with like-minded individuals and find out about exclusive Club Dine! events.

About Club Dine In!

Being healthy is not only about what you eat or how much you workout, but also about keeping the environment around you healthy. My focus is to increase awareness about holistic health, food policies, and environmental issues. 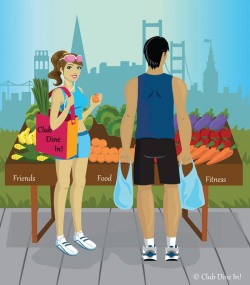